Alright, World. I read an ARC of Defy, by Sara Larsen. It comes out January of 2014, and I’m going to ramble about it. But first, here’s the cover and the back cover copy. (I don’t like writing the query/back cover for my own books, so I’m definitely not writing it for someone else’s.) 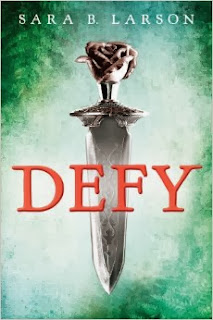 A lush and gorgeously written debut, packed with action, intrigue, and heart-racing romance.


Alexa Hollen is a fighter. Forced to disguise herself as a boy and serve in the king's army, Alex uses her quick wit and fierce sword-fighting skills to earn a spot on the elite prince's guard. But when a powerful sorcerer sneaks into the palace in the dead of night, even Alex, who is virtually unbeatable, can't prevent him from abducting her, her fellow guard and friend Rylan, and Prince Damian, taking them through the treacherous wilds of the jungle and deep into enemy territory.


The longer Alex is held captive with both Rylan and the prince, the more she realizes that she is not the only one who has been keeping dangerous secrets. And suddenly, after her own secret is revealed, Alex finds herself confronted with two men vying for her heart: the safe and steady Rylan, who has always cared for her, and the dark, intriguing Damian. With hidden foes lurking around every corner, is Alex strong enough to save herself and the kingdom she's sworn to protect?

Now, when “Writing with Shelly and Chad” volunteered to read the ARC, I thought the Shelly half of this blog would be doing the reading. It’s more up her alley—the whole romance thing (This book is more than a romance, it's an adventurous ride, but romance is still a huge part of the story). I write books about middle school kids in the future who have time machines and robot monkeys and have to deal with an evil mastermind. Surprise, surprise; I don’t read many romances. Like none. Well, Shelly and I used to take turns picking a book and reading it together. And she picked Pride and Prejudice. Yes, I’m a good husband. Yes, I read it with her. Though Shelly was disappointed in my inability to squeal during certain reveals of the book, I walked away tipping my hat to Jane Austen. She writes very well. But beside that, I can’t think of a romance I’ve read. But the way our schedules worked out, Shelly couldn’t work it in, so I jumped in.

My overall opinion: Defy is an engaging, well-developed story that should thrill YA fans. Sara worked some good magic.
Now, before I continue, I do need to shoot out a disclaimer. You see I’m a middle-grade author. I write especially for kids between the ages of 8-14. Some people may be looking for my recommendations for that age group. Defy is not a middle grade book, and I wouldn’t recommend it for those ages. It is a true young adult book, with more intense sequences and more mature subject matter. For example, the book includes a breeding house where orphan girls are abused to produce future soldiers. Sara Larsen shows the tragedy while still using a healthy dose of tact, but I feel I need to be clear about audience.

The story has a cast of intriguing characters in a troubled kingdom, and being the prince’s guard is a dangerous place to be. It also takes the reader through nice twists and turns, leaving him or her guessing, or feeling smart for picking up on the well-placed clues. Some tropes, like a girl disguised as a boy, have been used many times over, but the story feels new, full, and real.

I will admit to losing a little of my reading momentum in the middle with some of the love triangle, but again, I refer you to the fact that I’m not the target audience. I could picture many squealing readers through those pages. But again, Defy is an engaging, well-developed story. You'll get lost in it. It's a great ride.

Oh, and the guy who seems to be in second place by the end of the book, is totally going to make a comeback. Yep. You’ll see.
Posted by Chad Morris at 10:36 PM