Several of you have asked the question, so I figured I should finally answer it. The answer is, "No."

More specifically: "No, I have never worn a doublet."

And a follow up statement: "And no, I'm not really sure what a doublet is."

But the closest I have ever come to wearing a doublet, was dressing up for Brandon Mull's Beyonder's launch party last year. 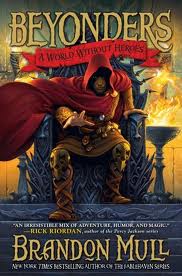 He throws a huge free party and asked the old comedy group to perform for a half hour or so. I agreed to the deal. The thought of what I was going to have to wear didn't even cross my mind. We usually perform in jeans and t-shirts. Turns out we had to wear medieval garb (which actually may be doublets, but again, I'm not completely sure.)
Here is the only pic I could find. 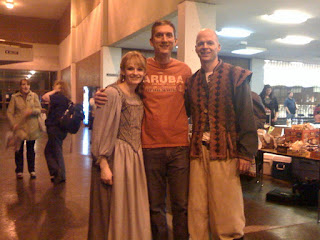 I know the guy in the middle isn't Brandon Mull. It's James Dashner (and maybe Jessica Day George in the background). He was also part of the show, but he didn't have to wear a costume . . . unfair.

As a thank you for helping out that night, Brandon gave shelly and I a signed copy of Beyonders. Because of the hero theme to the book he wrote "you're my heroes" on the inside. My favorite part of the night though, was when I got that book back from my daughter who had asked if she could carry it around for a while. She took the liberty of responding to Brandon's dedication (Check the seven-year-old's writing in green): 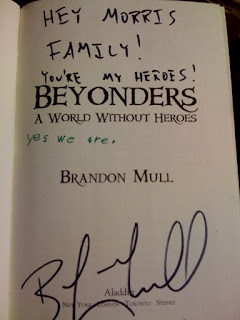 She's awesome. And she says that all the time. In fact, she even made a flash card on my iPad that asks on one side "are you awesome?" when you flip it over it says, "if you are me, then Yes!" But that is beside the point.

Anyway, for those of you interested and living in Utah (or want to travel to Utah) Brandon is throwing another huge free party when his next book comes out (March 13 at Cottonwood high). Yes, Shelly and I will be performing. The wardrobe is undetermined at this point. I'm personally hoping we'll go back to jeans and a t-shirt. And Brandon was kind enough to give us an ARC of the next Beyonders. Shelly's finished it and will review it tomorrow. 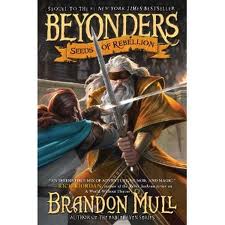 And I'm pretty sure the Beyonder's facebook page is giving away another ARC this week (but I'm too lazy to include the link).
Posted by Chad Morris at 12:31 AM