5 REASONS I LOVE WRITING: The Writing Process and My Kids

I thought it might be a good idea to blog about why I like to write. It sure beat my other ideas to blog about why I had a mullet in high school, how I get carsick, or why “Cowboys and Aliens” is most likely a mediocre movie just because of its premise (I haven't seen it).

There are many reasons why I love to write, but recently, I’ve been thinking about five of them. Here they are (surrounding Shelly and I): 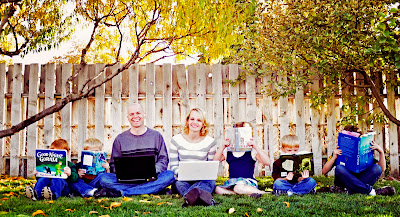 My point is that I love writing because of my kids. More specifically . . .

1) I love how knowing that I want my kids to read my stories (now or some day in the future) affects the way I write. I want to capture their imaginations, make them laugh, and help them love reading. It also helps me be rather responsible in my writing. I never want to write something I'd be ashamed if they read.

3) It teaches them about dreams. One day my son asked me why I write. I told him because it's a dream of mine to be published, and even though I have another job I love, and I'm old (in his eyes, and maybe in yours, but that's beside the point), I still believe in shooting for dreams. I hope he'll do the same.

On a related note, I love how it teaches them about the realities of trying make dreams come true. I've told my children about submitting to publishers and agents, and they've been excited with me, and a little heartbroken too. It gives me a chance to teach that it will take persistence. Though sometimes I hate the persistence it takes, I love that they can see it and learn from it.

4) They learn about the writing process. After I finished my latest manuscript and sent it through a few reviewers, I asked my then nine-year-old son if he wanted to read it, even though it’s technically a little above his reading level. He quickly agreed. I told him that I didn't just want to here what he liked, but what he didn't. I wanted to know when the book was slow and he wanted to put it down, as well as when he really enjoyed it.

Despite all my talk, here are a few of his comments: 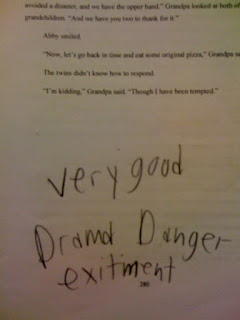 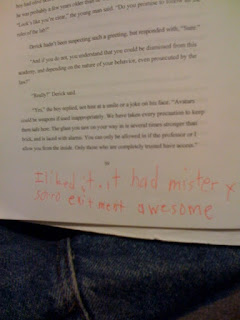 In his defense, he did tell me the name Jacqueline was too hard to read, and he told me when some paragraphs were confusing.


I then gave it to my daughter, who didn't finish (She’s was only seven at the time), but she did doodle on it. 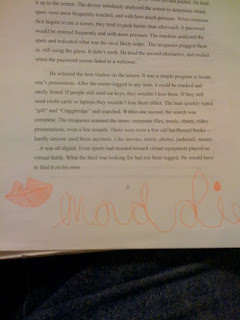 I think it's great that they see me write and rewrite. They know I don't expect it to be perfect until the very end.) My son has even asked me to give him feedback on some of his stories.

5. There are a lot of ways I'm involved in my children's lives (even though I was able to take the season off from little league coaching), this is a way they can be involved in mine.

I submitted to a publisher just a few days ago. I told my children and they got a little too excited. My oldest has drawn possible covers for the book. The others pray that it will be accepted. I explained that though I’ve talked with this publisher about the concept of the book and they expressed some interest, this is FAR from a sure thing. The six-year-old twins demanded that I read it to them. The others agreed--even my oldest who has already read it.

Last night as they all lay tucked in their beds, I read chapter 2. The ones that were awake by the end begged for more. I'll take what I can get.
Posted by Chad Morris at 10:25 PM