A Letter; or Why I'm Bald 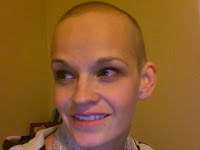 When I was little, four or five, I was ill. My body ran a high fever and my white blood cell count was huge. But when it came time to understand and treat what was ailing me, the doctors were stumped. I was admitted to a hospital for observation (and I think it was a learning hospital) and spent days in testing. Eventually, shrugging, the doctors sent me home. My body healed and then once a year or so for the next several years I would get really sick. The doctors thought it might be anything from Lupus to a food allergy. This went on until I was about twelve.

I believe it was this experience that led me to believe at a young age that I would live a short life. It was a sad thought, but I had come to terms with it. It was more something I sensed than something I dwelt on or anything anyone ever told me—one of those premonition feelings. You would think that this would depress me, but instead it inspired me to live my life like I didn’t have much of it left.

To be honest it was rather a dramatic idea. The candle that burned so hot it snuffed out early. But what could I do? I was rather dramatic.

I was biding my time. Savoring the days. Appreciating new friends. Learning EVERYTHING I could. Hugging a lot. Living the moment. Grateful to see everything come back to life each new spring. Grateful to be alive.

After receiving our patriarical blessings, my own sister said, “Did you hear that? I am going to get MARRIED! Too bad you’re dying of cancer.” I just smiled. She was being flippant and silly. It’s her style of humor. Believe it or not she’s funnier than I am. My blessing didn’t say I was dying of cancer but there were some hard things in there that both her and I heard as “you’re dying of cancer.” Once again, I knew that there was a hourglass running on my life and I needed to live it now! I needed to make myself strong for the trials ahead.

But here I am. I just crossed the 30 year mark a bit ago. This dreaded illness, the cancer, lupus, whatever it is hasn’t shown itself since I was a young teen. I have been rather healthy. I have given birth to five healthy children and have a healthy husband.

So when my cousin Jenny said that she was going to shave her head for cancer research she made me think. We have both donated to locks of love a couple of times but shaving her head bald was HUGE! She got me thinking. My first thought was ‘but my hair is my favorite accessory!’ Then I remembered my ‘cancerless’ life. I had been preparing my heart for going bald a long time ago and I NEVER did. When I thought about that I realized I had to do it.

You already know that I shaved my head in honor of my tiny cousin, Tyson, who has leukemia. What I am trying to tell you now is that I did it to find a cure for kids like the ones I met in the hospital when I was a child. I did it to live my life to the fullest. Life is too short to be afraid of baldness.  I did this out of gratitude for my health. I didn’t do anything to deserve to be as healthy as I am. I really thought I wouldn’t be. But I am and I’m grateful. And in honor of all of those who go bald because they aren’t as healthy, I shaved my hair, my favorite accessory. Shed my vanity. Helped with a cause I believe in. Lived. And hopefully, so will they.
Posted by Small Town Shelly Brown at 1:30 AM