Why I Hate It's A Small World 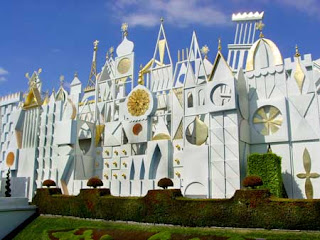 It’s embarrassing to admit sometimes, but once upon a time
I was 13 years-old.
And I was, unfortunately, like many other 13-year-olds.

One year my family went to Disneyland with some friends who had a 13-year-old girl my age (two 13-year-old together . . . ah! . . .the immaturity compounds) and her brother who was a year older. At that age we were set free on the park and told to meet at the front gates at midnight (my memory says 1 am but I don’t know if that’s even possible- maybe midnight felt like 1 am to a 13 year old)

We had a blast, but as you can imagine, we ran ourselves ragged all day long in the sun. With only about 10 minutes till closing we found ourselves running out of  the north side of FantasyLand towards Space Mountain (just one more time!!!), but were stopped by our parents and about 10 tired kids.

We explained that we didn’t have time to talk if we were going to make Space Mountain before it closed and we would see them at the gates. But they had us where they wanted us-- with them--they weren’t going to let us go.

Their plan: Small World as a family, then go back to the hotels.

I can only imagine how persuasive my whining fit was, but alas, I did not prevail.
I folded my arms and lowered my brow to make sure that every animatronic child in Denmark knew I was not having fun. 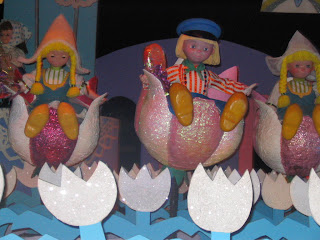 Then I saw the most brilliant act of rebellion I had ever witnessed. My friend’s older brother was bending over the boat and gathering pennies from the bottom of the sluice. Then taking those pennies, he flicked them at the stiffly dancing characters.

I wanted in on that.

(Looking back I am so embarrassed that this was an enticing proposition, but in my tired, angry teenage brain, it was.)

When I bent over the side of the boat to reach the floor, ALL of my money and souvenirs fell out of the front pocket of my overalls (Yes, overalls. No, New Kids on the Block weren’t cool anymore.) What do I do? What do I do? Then my same 13-year-old brain came up with a solution. We’re the last boats… so

I jumped in after my stuff.

At least I tried to jump, but my father caught the back straps of my overalls.

I frantically explained the situation and at the end of my pleadings he pointed out a walkway that followed along beside the characters and told me to go on the path and hurry.

I leapt to the path and ran down and around a curve until I came to a wall. The path ended completely. I poked my head around the corner to see that I still had quite a ways to go until I got to the spot where my stuff was. I would have to trudge through waist-high water with the possibility of being hit by a boat filled with startled park goers. So this path was a no-go. Then a horrible thought went through my mind. 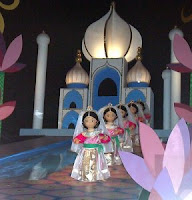 If this part ends with a wall….

I ran to try and catch my boat I came in, but found another wall. Poking my head around that corner I spied my boat just a little ways off. Seeing no other option:

I jumped in the water in It’s A Small World.

I trudged back to the boat, the bottom portion of my overalls darker than the rest. I awkwardly climbed back into the boat, and folded my arms once again.

When we got to the end of the ride, we explained the story to an amused cast member and asked if we could ride it one more time to retrieve the lost treasures. They consented and

I GOT TO RIDE IT AGAIN

I got 5 more minutes with that highly repetitive song. 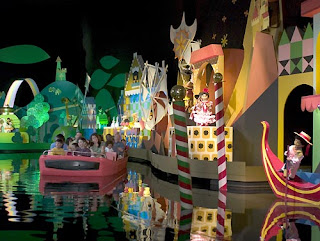 (in case you were wondering—I got my trinkets)

Posted by Small Town Shelly Brown at 7:00 AM

Email ThisBlogThis!Share to TwitterShare to FacebookShare to Pinterest
Labels: Disney, Embarrassing, Its A Small World